Keiko’s story has been written by children… 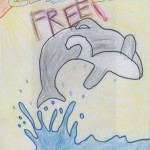 “’Please help Keiko,’ wrote the children in French, Spanish, German, English and other languages from around the world to the film producers at Warner Brothers. And the movement began….

“Hundreds of school groups raised funds with bake sales, walk-a-thons and raffles. One Tampa, Florida elementary school raised $30,000! Before Keiko was even moved to the Oregon Coast Aquarium to improve his health and living conditions, in January 1996, children had contributed $150,000 of millions that would be needed. And as Keiko left Mexico City, children lined up the streets for miles from Reino Aventura to the airport – some weeping in the night, others waving signs of “adios.” Oregonian children greeted his rainy arrival in much the same way.

“As Keiko regained his health in the next two years, hundreds of letters and emails a week continued to pour into the newly-formed Free Willy/Keiko Foundation, set up to handle his care. Cards, pictures and baked goods accompanied their correspondence. 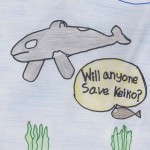