Watch how Keiko, the orca star of the hit film Free Willy, became the first captive orca to be successfully returned to his ocean. From capture to stardom to rehabilitation, from seapen to daily outings with caretakers, experience how Keiko gained over 3000 lbs, mixed it up with wild orcas, and even exhibited physical signs of attempts to mate, all the while thriving in the waters of his birth. 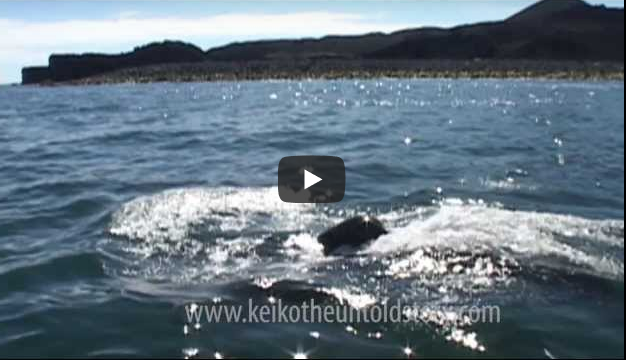 “There were so many people who fell in love with Keiko and I think it’s
really unfortunate that they don’t know what really happened to him.”
– Dr. Naomi Rose

“KEIKO THE UNTOLD STORY” gives dignity and insight into the journey of the world’s most famous Orca.
Keiko is an ambassador of freedom to all marine animals in captivity.”
–Jennie Lew Tugend, Producer of “Free Willy”

Giving an astonishing performance, Keiko swam straight into the hearts of millions of school children and adults around the world upon the debut of Free Willy in July 1993.

So it was quite a jolt when his fans discovered that, unlike his fictional counterpart, Keiko was not free.

Everyone hoped that Keiko would find his family and live happily ever after. When that didn’t happen, the media walked away and called the effort a failure.

This is the amazing story of what actually happened with Keiko. The film takes the viewer on Keiko’s journey, explores his strong will to survive, and enjoys his enormous embrace of his own freedom.

Through first hand accounts by those who were there every day, the film follows Keiko, his life, his legacy, and the untold story of his extraordinary years of ‘freedom’ in Iceland and Norway where he thrived before his death in 2003.