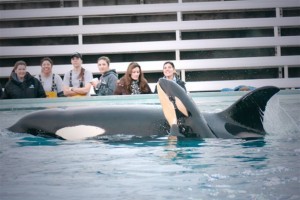 The Orca Welfare and Safety Act is a new bill being pushed in California that would make it illegal to hold in captivity, or use, a wild-caught or captive-bred orca for performance or entertainment purposes.” The bill would also prohibit artificial insemination of captive killer whales in California and block the import of orcas or orca semen from other states.

If passed, the bill would require that all 10 orcas held in tanks at SeaWorld San Diego be rehabilitated and returned to the wild. If that is not possible, then the whales must be “transferred and held in a sea pen that is open to the public and not used for performance or entertainment purposes.”

A captive Orca whale has not been released back into the wild since 1998 when Keiko, the iconic whale from the hit movie “Free Willy,” was successfully released back into his Native Icelandic waters following the public outcry and support of his release.

“Keiko: the Untold Story of the Star of Free Willy” is a documentary exploring the life and success of Keiko’s journey from being captured at the age of 2  for entertainment purposes, his rise to fame following “Free Willy,” the tremendous support among children and adults which helped raise funding for his release, and his experience as a free whale until his death in 2003.